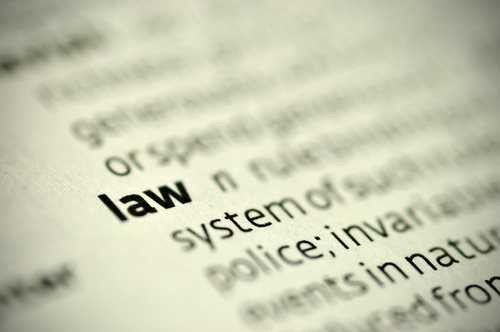 Adjudication is a colloquial term, which refers to the formal legal process by which a judge or arbiter reviews evidence and testimonies including legal reasoning offered by litigants or opposing parties to come to a decision, which ultimately determines the distribution of rights and obligations for the parties involved. Adjudication is distinct from other justice-seeking or evidence-based resolution formats; in particular, the process is only used to solve the following types of disputes:

Adjudication occurs when a natural person, typically someone empowered by an agency to formalize a binding decision, is given the task of examining evidence or facts to render a legally-acceptable and affirmed judgment. As a result of this process and the broad definition attached, adjudication may refer to a casual form of judging, such as in athletic competitions, where a body of judges adjudicate and awards scores to the competitors; or adjudication may  occur in business, where a qualified judge is called to examine the facts to resolve a dispute between two parties.

As stated earlier, a judge (instead of a jury) will typically settle disputes between parties in adjudication. Although the adjudication process is quicker and typically less expensive, the review of facts is generally thought to be less thorough and sympathetic when compared to a trial by jury.

In the legal sense, an adjudicator is not regarded as a mediatory, even though the two parties are required to come to terms or agree on a settlement to resolve a case. In the majority of situations, a mediator will help find a compromise between feuding parties, but they cannot force the parties to do so. In contrast, the legal adjudication process and the settlement it reaches, does require the parties involved to comply to the punishments or settlements outlined; the resolution the legal adjudication process reaches is legal binding.

What is Deferred Adjudication?

Deferred Adjudication is offered a number of individuals who have no prior arrests and have been accused of committing a small or minor crime. As oppose to serving a sentence or paying a fine, the deferred adjudication process will allow the individual to complete community service hours or educational classes, such as an anger management class for instance, to terminate the charges and the attached punishments.

As a result of this elimination, deferred adjudication is a plea bargain agreement between a defendant and the coordinating legal body. The final judgment is postponed or “deferred” until the end of the individual’s probation period. If the individual successfully completes the probation period, the charges are dropped.

In order to receive a deferred adjudication from a court system, a defendant is required to either enter a plea of guilty or a plea of no contest to their respective charges. In either setting, the defendant admits to the crime charged—a plea of no contest is more advantageous for it offers a degree of protection from subsequent civil charges that may be levied against the individual.

Although deferred adjudication, upon completing the required community service or classroom work, drops the accused’s charges, the individual’s original arrest record, as well as the record of the action of the court, remains unchanged.